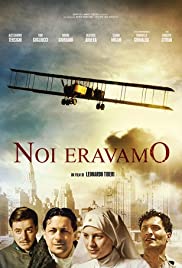 Veneto, 1918. A member of the Italian-American Congress goes to the Italian pilot center to fight alongside the airmen aboard the new Caproni fighters. His name will remain in history: it is Fiorello La Guardia, future mayor of New York. But La Guardia is not the only immigrant of Italian origin to serve on the front: alongside him there are volunteers from all over the world to pay homage to their roots, including the brothers Guglielmo and Luciano Cusin, Argentine children of Venetian immigrants , one mechanic expert in airplane engines, the other aspiring writer. Around them move the Italian volunteers of the Red Cross, including Dr. Bassani, a gynecologist who became an emergency surgeon ("like everyone else at war"), Adelaide, a Venetian nun, and Agnese, a student of medicine at work in the field hospital as a nurse.
Director: Leonardo Tiberi
Production: Baires Film / Istituto Luce
Cast: Alessandro Tersigni, Yari Gugliucci, Davide Giordano
Italy - 2017